Dealing with HIV in Madagascar: experts met for the international steering committee of the EVAMAD project

The first International Steering Committee of the EVAMAD project on “Expanding access to HIV viral load testing and strengthening the health system in Madagascar” took place on 4 December 2020 at the office of the national committee for dealing with AIDS (SE-CNLS or Secrétariat Exécutif du Comité National de Lutte contre le Sida). 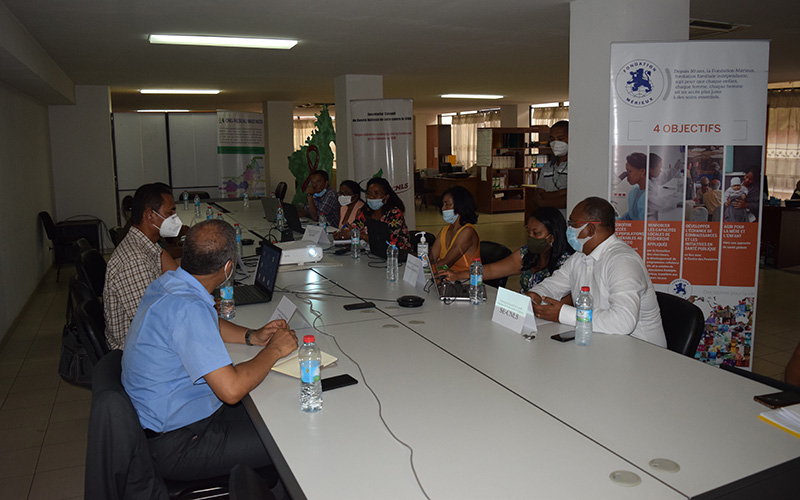 About twenty participants, including public health experts and representatives of the project’s member institutions, got together to present the launch and continuation of the EVAMAD project and to propose and approve annual work plans, in line with the objectives of the project.

As well as a presentation by EVAMAD, with interventions from the participants, the Steering Committee also offered the opportunity to review efforts to adapt the project to the context of the COVID-19 crisis, thanks to additional financial support from Expertise France. HIV healthcare staff and people living with HIV were provided with personal protection equipment (PPE) and a study has begun into HIV/COVID-19 co-infection.

The objective of the EVAMAD project is to improve the management of people living with HIV (PLHIV) in Madagascar, by gradually scaling up access to HIV viral load testing.

What is the viral load?

Measuring the viral load detects the quantity of the virus in the blood of a person living with HIV. These tests are the key to dealing with HIV, since they allow the effectiveness of antiretroviral treatments to be measured, the transmission of HIV to be slowed down and the risk of spreading HIV resistant to medication to be limited. Easier access to viral load testing helps to achieve the 95-95-95 targets set by UNAIDS, in particular the objective of having an undetectable viral load (and therefore break the chain of transmission for HIV) for 95% of people receiving antiretroviral (RNA) treatment.

In order to secure and expand coverage of the HIV RNA viral load test to the entire island, the EVAMAD project helps to develop access to routine HIV load tests for people living with HIV, as well as to emergency viral load tests, in particular for pregnant women and for early diagnosis amongst newborn babies. Finally, the project aims to improve the virological success rate with treatment in Madagascar.

EVAMAD has been set up for a duration of three years, thanks in particular to financial support for the initiative from Expertise France. In order to achieve its objectives, the project brings together various institutions with expertise in dealing with HIV in Madagascar, who meet for the Steering Committee:

In the long run, EVAMAD should allow all PLHIV to have access to HIV viral load tests. More widely speaking, the project will help to improve the system of laboratories in Madagascar in response to numerous contagious and non-contagious, endemic and epidemic infections, which have an impact on the island.

Dealing with HIV/Aids in Madagascar

According to UNAIDS estimates, the number of people living with HIV in Madagascar at the end of 2019 was 39,000, with 5,700 knowing their serological status. Of those, 5,200 benefit from antiretroviral therapy and 1,976 have already had access to at least one HIV RNA viral load test.

Coverage of viral load testing currently only fulfils 39% of requirements. Thanks to the work of the National Programme and the support of the Global Fund and other financial partners, the number of people living with HIV who are aware of their status and benefit from antiretroviral treatment is continuing to increase.

Expertise France is a French public agency that plays a key role in international technical cooperation projects. It designs and implements projects to provide long-term support to government policies in developing and emerging countries. The agency intervenes in key areas of sustainable development – including governance, security, climate, healthcare and education – and helps its partners to work towards the 2030 Agenda.