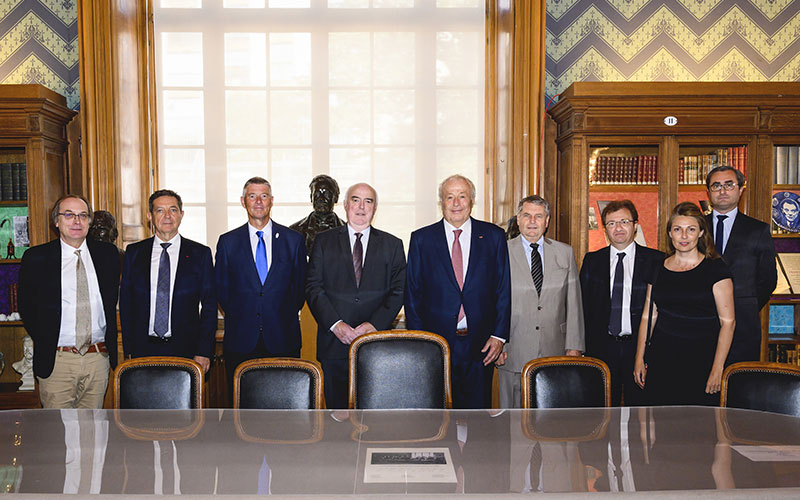 With a long experience in the field, working with the Institut Pasteur International Network and the Mérieux Foundation’s GABRIEL network, the two partners have already collaborated on close to a dozen international projects, demonstrating their complementary expertise. This agreement will strengthen synergies between their networks, bringing together over 50 centers on five continents.

As a platform recognized by public authorities and international organizations, the alliance will be poised to build projects, with public and private funding, to improve public health in the most vulnerable regions.

It will therefore help support the implementation of the Sustainable Development Goals (SDGs) for global health.

The alliance, known as the Alliance Pasteur Mérieux International, will be backed by a foundation, created by the two partners and placed under the aegis of the Institut Pasteur. This will make it possible to jointly manage projects and provide a main focal point for funders from the public and private sectors, from France and abroad.

“The Institut Pasteur embodies scientific excellence and a Pasteurian tradition that has brought French medicine to all parts of the world,” said Alain Mérieux, President of the Mérieux Foundation. “The Mérieux Foundation, moreover, brings a very strong understanding of the field and the power of its network of sentinel laboratories, created in partnership with local public health authorities.”

“The Institut Pasteur’s commitment to this alliance is based on its expertise in responding to health crises in terms of research, capacity building through training, and cooperation with local stakeholders, thus contributing to the improvement of surveillance and warning systems in the concerned countries,” declared Christian Vigouroux, Chairman of the Institut Pasteur Board of Directors.

About the Mérieux Foundation

Created in 1967, Fondation Mérieux is an independent family foundation with public interest status, chaired by Alain Mérieux. Its mission is to contribute to global health by strengthening the local capacities of developing countries to reduce the impact of infectious diseases that affect vulnerable populations, particularly mothers and children. Present in some twenty countries in West Africa, the Indian Ocean, the Caribbean, Latin America, Asia and the Middle East, the Mérieux Foundation focuses its action on four objectives: increasing access to diagnosis for vulnerable populations, enhancing local applied research capabilities, encouraging knowledge-sharing and improving conditions for mothers and children, taking a global health approach.

The GABRIEL network was created by Fondation Mérieux in 2008 and now has 20 member laboratories in 16 countries. This international scientific network works in synergy to develop the research and training capacities of local laboratories and improve surveillance of diseases with a major impact on public health in developing countries. The network includes local reference laboratories, as well as academic, university and hospital research institutes and Rodolphe Mérieux Laboratories, high-level biosafety laboratories, created by the Mérieux Foundation and given to partners in low-income countries.

The Institut Pasteur, a non-profit foundation with recognized charitable status set up by Louis Pasteur in 1887, is today an internationally renowned center for biomedical research with a network of 32 institutes worldwide. In the pursuit of its mission to prevent and control diseases in France and throughout the world, the Institut Pasteur operates in four main areas: research, public health, education and training, and development of research applications.

More than 2,600 people work on its Paris campus. The Institut Pasteur is a globally recognized leader in infectious diseases, microbiology, and immunology. Other avenues of investigation include cancer, genetic and neurodegenerative diseases, genomics and developmental biology. This research aims to expand our knowledge of the living world in a bid to lay the foundations for new prevention strategies and novel therapeutics. Since its inception, 10 Institut Pasteur scientists have been awarded the Nobel Prize for Medicine, including two in 2008 for the 1983 discovery of the human immunodeficiency virus (HIV) that causes AIDS.