Plans are being made to create a biosecurity network covering the entire G5 Sahel area (Burkina Faso, Chad, Mali, Mauritania, and Niger), designed to deliver an improved response to biological threats, and more efficiently combat epidemics and the emergence of new categories of crises. 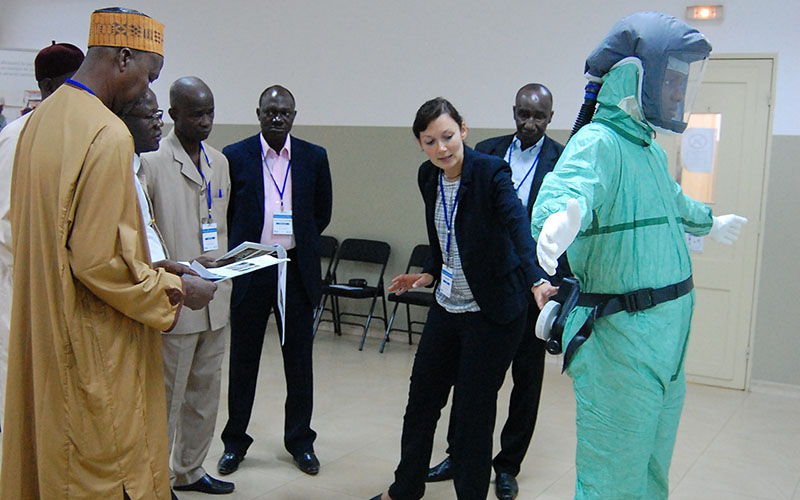 Financially backed by the GIZ (German Federal Enterprise for International Cooperation), the G5 Sahel project is mainly delivered on the ground by the Mérieux Foundation and the Bundeswehr Institute of Microbiology in Munich, as part of the German Partnership Programme for Excellence in Biological and Health Security from the German Ministry of Foreign Affairs. The project is setting out to create a network of mobile laboratories in the G5 Sahel countries.

The project was launched September 20-21, 2016. A launch workshop was held in which high officials from the Ministries of Health in Burkina Faso, Mauritania, Niger, and Chad were able to learn from the experience of their German and Malian counterparts in using mobile laboratories.

Mali has had a mobile lab in operation since December 2014. The lab works to screen and diagnose Ebola virus disease as well as other dangerous pathogens. Developed by the Bundeswehr Institute of Microbiology in Munich, the lab is based in the Charles Mérieux Center for Infectious Disease in Bamako, a training and research center founded in 2005 through a public-private partnership between the Mérieux Foundation and the Malian government.

The Charles Mérieux Center for Infectious Disease manages the Malian mobile laboratory and the full program of training and support, with help from its partners and the Mérieux Foundation in particular. Eight Malian scientists were trained in how to use the equipment so that they could manage the lab themselves. The mobile lab can be transported to remote regions and deployed in the field when epidemics occur.

The pilot scheme in September 2016 was carried out at the Center for Infectious Disease in Bamako, as were the two training courses sessions running between October 10 and 21, 2016. In these courses, jointly organized by the Bundeswehr Institute of Microbiology and the Center, biology experts from the G5 Sahel countries learned how to make the most effective use of the mobile lab, as well as how to detect and categorize highly pathogenic agents.

Mission: to bolster the overall safety of people in the G5 Sahel

Biologists from each of the five countries then took part in a deployment exercise of the mobile lab in Koulikouro, November 2-9. The exercise was intended to test the ability of the Malian experts to transport, set up, and use the mobile lab in the field, simulating the outbreak of an epidemic. The Charles Mérieux Center for Infectious Disease held a seminar focusing on this on November 8th, working closely with the Mérieux Foundation.

In 2017, the aim is to consolidate this network through training and conferences in the G5 Sahel countries. The project’s mission is to reinforce the overall security of people in the G5 Sahel, as well as to be better equipped to combat bioterrorism. The Ebola crisis showed that the G5 Sahel countries are not safe from the threat posed by outbreaks of highly pathogenic diseases with potentially serious consequences for the health and safety of the local communities.

In addition to the GIZ (for its financial support), and the Bundeswehr Institute of Microbiology (for its technical expertise), the Fondation Mérieux is delivering this biosafety project as part of the German Partnership Programme for Excellence in Biological and Health Security from the German Ministry of Foreign Affairs, in partnership with: