Professor Ogobara Doumbo: death of a public health visionary, mentor and role model for generations of scientists in Africa and worldwide

The Mérieux Foundation is deeply saddened by the loss of Professor Ogobara Doumbo, who passed away June 9th. Our thoughts are with his family and loved ones. 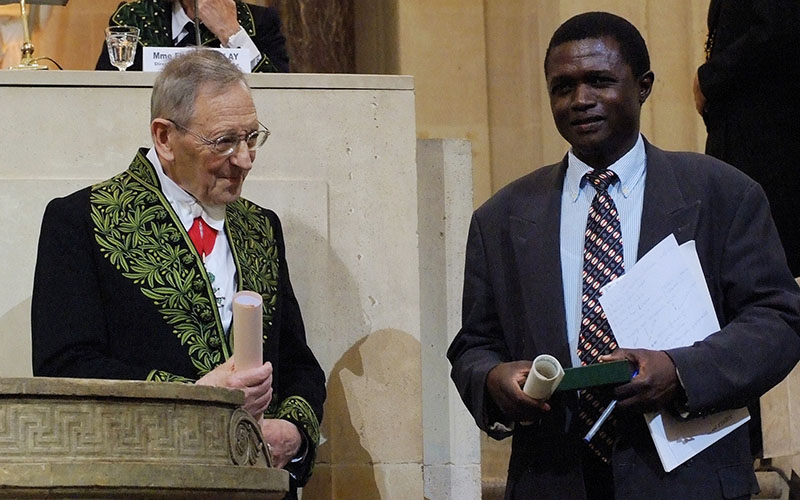 Director of the Malaria Research and Training Center at the Faculty of Medicine, Pharmacy and Odontostomatology of the University of Bamako in Mali, since 2002, Prof. Ogobara Doumbo led one of the biggest research and training teams in Africa.

The Mérieux Foundation has lost an exceptional advisor who played a pivotal role helping to shape its development. A member of the foundation’s Scientific Advisory Board and Chairman of the Board of the Charles Mérieux Center for Infectious Disease of Mali (CICM), Prof. Doumbo was the first recipient of the Christophe Mérieux Prize, which he was awarded in 2007 for his malaria research. He was also the first to hold the Doctors Mérieux Chair, conducting research at the University Hospital Institute Méditerranée Infection (Timone Hospital) in Marseille.

“Ogobara Doumbo contributed to the emergence of excellence in scientific research in Africa. The outstanding quality of his work has led to major advances in the fight against malaria,” said Alain Mérieux, President of the Mérieux Foundation. “His meeting with my son Christophe, in 2003, gave a new impetus to our work in Mali. Since then, throughout the years, Ogobara Doumbo brought his enlightening vision for medicine to our Foundation. I pay tribute to the strength of his humanism, to his great simplicity and to the incredible charisma of a man whose vision and action foreshadow the future of health on the African continent and in the world. I salute a friend.”

The concepts promoted by Ogobara Doumbo became central to the Mérieux Foundation’s model for action: the principle of not “doing for” but rather “working with” the local authorities and partners to leverage their strengths and catalyze the development of initiatives and capacities that are owned and managed locally.

Professor Doumbo’s work goes far beyond his important contribution to global malaria research. His Malaria Research and Training Center is considered a model for research capacity building in low-income countries. By promoting access to quality care for all and developing local research in collaboration with the international scientific community, Ogobara Doumbo has advanced Africa on the path to self-reliance in health.

Prof. Ogobara Doumbo, MD, PhD, FASTMH, FASS, was professor of parasitology-mycology and a researcher at the University of Technical Sciences and Technology of Bamako. Director of the Malaria Research and Training Center at the Faculty of Medicine, Pharmacy and Odontostomatology, a center of excellence established in partnership with the United States NIAID/NIH, he also served 10 years as Chair of the Department of Epidemiology of Parasitic Diseases at the University of Mali. He was Chairman of the Board of the University of Segou in Mali and a member of the board of the French “Institut de Recherche pour le Développement” (IRD). Chairman of the Board of the Charles Mérieux Center for Infectious Disease of Mali, he was a member of the Mérieux Foundation’s Scientific Advisory Board and the first to hold, in 2013, the Mérieux Doctors Chair in Infectious Disease given by the French Academies of Sciences and Medicine and the Institut de France.

He was also an Adjunct Associate Professor of Tropical Medicine at the Tulane School of Public Health, and from 1996-2001 directed the Mali-Tulane Tropical Medical Research Center Program. He sat as a member of the Science and Health Advisory Board at Malaria No More and was an Honorary elected member of the Alpha Omega Alpha US Medical Society. Prof. Doumbo led the MRTC-ICER USTTB-NIAID malaria vaccines programs in Mali.

Prof. Doumbo was the primary and senior investigator for several malaria drug trials, malaria vaccine trials as well as the WHO-sponsored Multilateral Initiative on Malaria/ Special Programme for Research and Training in Tropical Diseases (MIM/TDR) task force on malaria research in Africa. He was a member of the “International Committee for Certification of Elimination of Dracunculiasis” to advise the Director-General of WHO.

Prof. Doumbo received global recognition for his contributions to science, including the Research Award on Malaria in Africa, the 2007 Christophe Mérieux Prize of the Institut de France, the Spanish Prize of Prince des Asturia in 2008, and the International Research award of Inserm in 2013.

He co-authored over 600 international publications. He led one of the largest malaria research and training teams in Africa in Mali and was a founding member of Mali’s Academy of Sciences since 2016. He was a member of the African Academy of Sciences, elected as a foreign fellow of the French Academy of Medicine in 2008 and as an International Fellow of the American Society of Tropical Medicine in 2016. He was a medalist of the Société Française de Pathologie Exotique since May 2017. He was a member of the National Health Sciences Ethics Committee on behalf of the Presidency of the Republic of Mali. Professor Doumbo was also Knight of the Order of Mali, Knight of the Academic Palms of CAMES, Officer of the Order of Merit of France and Officer of the Legion of Honour of France.