RESAMAD members get together for a week of workshops

Around thirty members of the RESAMAD network of laboratories in Madagascar met for a series of discussions and training workshops held between 18 and 22 October 2021. They went over the achievements made possible by the Network and the requirements and activities that have been identified. 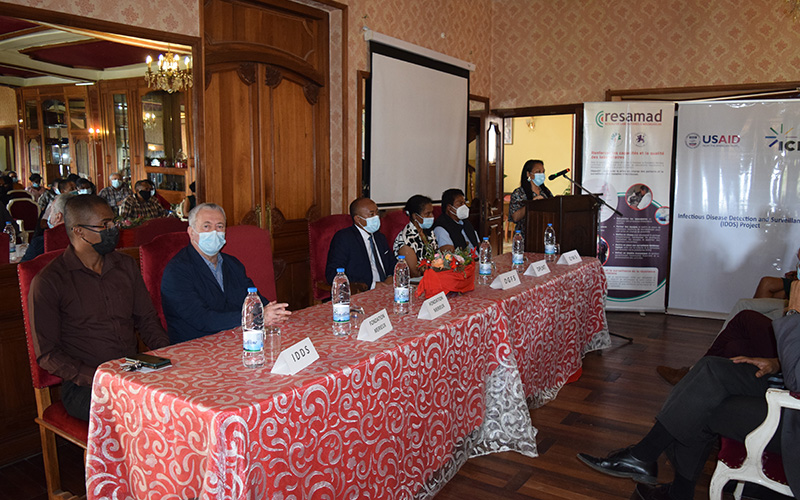 RESAMAD members during the week of workshops

These workshops were held at the Résidence Ankerana in Antananarivo, Madagascar, with the support of the IDDS – Infectious Disease Detection and Surveillance – project run by the United States agency for international development (USAID).

Biologists and technicians from laboratories in the network, as well as managers of member hospitals, met with representatives from the Ministry of Public Health in Madagascar, the Department of Pharmacy, Laboratories and Traditional Medicine, the Department of Health Surveillance and Epidemiological and Response Surveillance (DVSSER), the World Health Organization (WHO), the IDDS, the Charles Mérieux Centre of Infectious Disease in Madagascar and the Institut Pasteur in Madagascar.

Presentation of RESAMAD at the hotel La Résidence Ankerana, in Antananarivo, Madagascar.

This highlight in the calendar presented an opportunity to share experiences from various laboratories on the activities and topics that are at the heart of the RESAMAD network’s concerns. Members wanted to discuss the following subjects during the sessions: quality management in laboratories, the management of stocks of reagents and consumables, the maintenance of laboratory equipment, quality control in medical biology (microbiology, haematology and biochemistry) and ongoing training.

One session focussed on the Laboratory IT system (LabBook), the latest version of which will be deployed throughout the network and will make the monitoring of patient data easier and more secure.

A review of the entire National Strategic Plan for Laboratories (presented by the Head of the Laboratories Department (SLAB) for the Ministry of Public Health) was also presented to members of the network, who had played an active role in developing the plan over the course of several workshops.

One key workshop session dealt with the topic “RESAMAD: a necessary system?”, with discussions covering the history, development and current situation of the network, followed by a presentation of the benefits gained by experience.

Another key focus of the discussions was antimicrobial resistance (AMR). The various projects in which members of the network are involved were presented:

The member laboratories of the network are also involved in the collection and reporting of data on antimicrobial resistance, through the WHO’s GLASS project, with data passed on to the DVSSER. 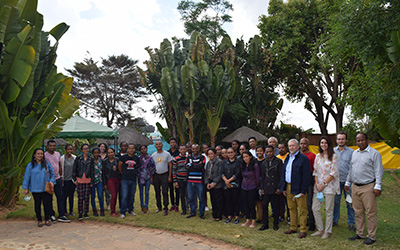 The group of participants in the week of workshops.

At the end of the workshops, an agreement was made to renew the request for human resources for laboratories, to continue training for quality control staff and biomedical technicians, and to tackle the issue of access to reagents and consumables. Support was also requested for the introduction of research projects to generate public health data.

At the closing ceremony for the series of workshops, RESAMAD biologist Dr Hoby Tantelinirimiarana emphasised that “It is my honour to speak on behalf of the network, which now has 27 members. We are coming to the end of five days of workshops aimed at strengthening and enhancing the capacities of labs to improve patient care. These workshops have involved discussions, consultations, interactions and the sharing of experiences, resulting in shared visions. […] I would like to thank all the members of the network, who have come from all over the island, for their enthusiasm and active participation and our special thanks go to the Ministry of Public Health and the Mérieux Foundation for the initiatives they have set up for the network.”

Luciana, a representative of the Mérieux Foundation in Madagascar, added:

“We would like to draw your attention to the key role played by laboratories in providing information for surveillance systems through the reporting of epidemiological data. The Mérieux Foundation is delighted to be able to lead the way for other partners in the reinforcement of laboratories in Madagascar.”

Dr Rado Razafimahatratra, Head of Healthcare and a representative of the Ministry of Public Health, rounded off by saying:

“Our laboratories help to achieve the target of the public health policy in Madagascar and play a leading role in the screening, confirmation and biological monitoring of the evolution of diseases. Our priority is to ensure that we have qualified human resources, plan ongoing training activities and benefit from shared experiences between all those involved, as this workshop has allowed. On behalf of the Ministry of Public Health, I would like to thank all the people and partners concerned.”

In order to improve the surveillance of diseases with the potential to cause epidemics in Madagascar, the Mérieux Foundation has taken a network-based approach to supporting laboratories in public and private hospitals. RESAMAD is the name of the network of laboratories in Madagascar, which allows member laboratories to pool resources and share expertise, while they also gain greater independence in their activities.

More specifically, this network of laboratories ensures staff training and provides technical support for introducing biomedical analysis used for the diagnosis and surveillance of infectious diseases, in order to improve the quality of care available for the people of Madagascar.