Tuberculosis (TB), which is caused by Mycobacterium tuberculosis (Mtb), is still one of the major causes of death due to infectious disease in the world, with 10 million new cases and 1.4 million deaths in 2019. Mtb can persist in the patient's body for several months and even years, thus requiring lengthy treatment with antibiotics.

Press release, Ecofect LabEx and Université de Lyon: The study devised by researchers from the International Centre for Infectiology Research (CIRI) and the Biometry and Evolutionary Biology Laboratory (LBBE), funded by the Ecofect LabEx under the EVOFIT-COMBO-TB project, focused on tuberculosis patients who responded slowly to treatment. We performed a genetic characterisation of the clinical isolates of Mtb to look for sub-populations likely to tolerate tuberculosis drugs. 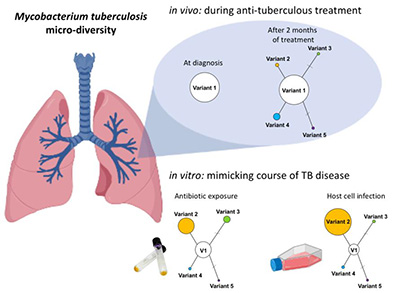 We found that the clinical Mtb isolates obtained from 9/15 patients presenting a delayed response to treatment contained different sub-populations. Additionally, in vitro exposure to a leading tuberculosis drug, rifampicin, revealed Mtb sub-populations in 6/15 isolates, none of which were linked to known drug-resistance mechanisms.

However, exposure to rifampicin revealed sub-populations of Mtb in only 2/20 isolates from the control cohort of patients who responded quickly to treatment. Furthermore, we characterised an Mtb variant isolated from a minority sub-population in the initial clinical isolate, but which became a majority sub-population following in vitro exposure to rifampicin. We found that this variant featured a modified lipid envelope and was able to develop in the presence of RIF and inside human macrophage cells – immune cells that play a central role in controlling Mtb infections. Even more importantly, we performed pharmacological modelling and found that this kind of variant may be related to a poor response to treatment.

To conclude, searching for particular Mtb sub-populations or variants may help identify patients at risk of treatment failure and provide additional guidance for TB management.