Following a week of training at the National Institute of Public Health Research in Mauritania, a mobile laboratory was installed in the suburbs of Nouakchott (Mauritania) for a two-week deployment exercise. The event was rounded off with a ceremony bringing together key players in the health sector and in One Health to celebrate the G5 Sahel project, which aims to enhance the biosecurity capacities of the G5 Sahel countries. 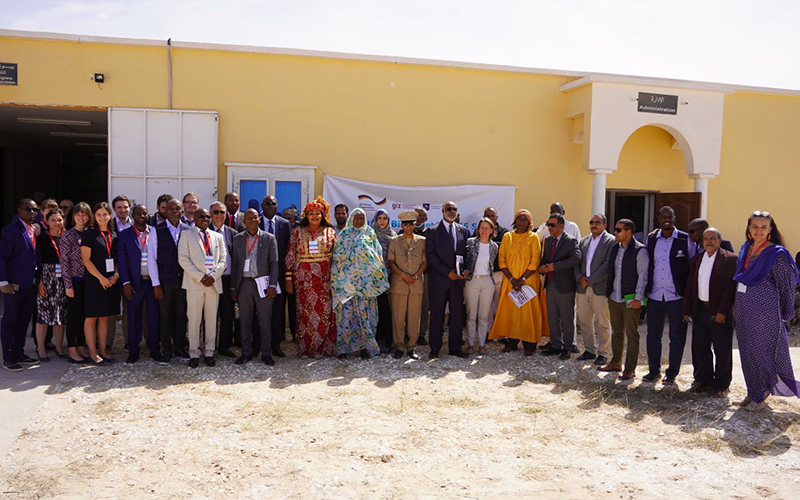 Key players in the health sector and One Health gathered at the ceremony day.

The project partners (Mérieux Foundation, GIZ and IMB) and representatives of the biosecurity network of the G5 Sahel countries (Burkina Faso, Mali, Mauritania, Niger and Chad) came together to prepare for this deployment. On this occasion, ten participants (two from each country) were trained in the use of a mobile laboratory, including how to operate the various workstations in the mobile laboratory and how to work as a team, in the context of an epidemic simulation. More specifically, topics that were examined in detail included the accuracy and promptness of diagnosis, the delivery of results to health services and communication with the authorities.

These important achievements were celebrated by the parties involved in the mobile laboratory project and in healthcare services in the region at a ceremony organized on November 24, 2022. The dignitaries attending the event included the prefect, the mayor, the President and the Governor of the South Nouakchott region, the interim Executive Secretary of G5 Sahel, the General Secretary of the Ministry of Health, the German ambassador, the WHO representative in Mauritania, the Director of Military Health, the representative of the President of the University of Nouakchott, and the deputy Director General of the INRSP.

The ceremony was an opportunity to present the mission and the project to the institutions present and to emphasize the fact that the mobile laboratory and the G5 Sahel Biosecurity Network must be integrated into national response plans in order to promote the sustainable use of mobile laboratory capacities and the team’s skills.

Finally, the representatives of the G5 Sahel Biosecurity Network met to discuss the future of the network, the rotation of the coordination role, the adoption of resolutions and the renewal of their collaboration agreement.

About the G5 Sahel Biosecurity Network:

This project aims to boost the capacity of the G5 Sahel countries to respond more effectively to natural or intentional biological threats, such as the emergence of an epidemic, acts of bioterrorism or other dangerous biological risks, by providing technical and practical on-site training delivered by a team from the Bundeswehr Institute of Microbiology (IMB).