A little over six months after the signing of the tripartite agreement between the Fitia Association, the Nutriset Group and the Mérieux Foundation, the NutriSud factory began producing nutritious products for school canteens in southern Madagascar, hit by the starvation and malnutrition.

Inauguration of the Nutrisud factory with Fitia association, Nutriset Group and the Mérieux Foundation (from left to right: Andry Rajoelina, President of the Republic of Madagascar, Mialy R. Rajoelina, First Lady of Madagascar and President of the Fitia Association, Pascal Vincelot, Mérieux Foundation’s Director of Cooperations and Prospective Programs, Adeline Lescanne Gautier, Director General of the Nutriset Group)

Developed by the Nutriset Group, the factory will be managed by the Fitia Association and funded by the Fondation Christophe et Rodolphe Mérieux, the Mérieux Foundation’s financial partner. Its opening ceremony was attended by the President of the Republic of Madagascar, Andry Rajoelina. 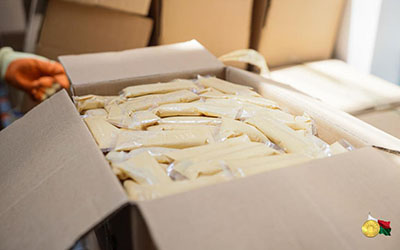 Each year, the factory will produce 8,000,000 nutritional sachets, the main ingredients of which are peanuts and milk. Credits: Fitia Association

120,000 children will benefit from the products developed by the Nutrisud factory and distributed in school canteens in the Anosy region where, according to the National Nutrition Office of Madagascar, almost 35% of children are suffering from stunted growth.

This “turnkey” container factory plays a role in the fight against malnutrition in the Anosy and Androy regions, where 1.14 million people urgently need food aid, according to the Integrated Food Security Phase Classification.

The project includes an economic development dimension, since it relies on local agricultural sectors for the purchase of raw materials (maize, rice, peanuts, etc.) and promotes the empowerment of women through its recruitment programme.

History of the project: a tripartite collaboration

This project was initiated by Alain Mérieux following his meeting with the President of Madagascar, Andry Rajoelina, when the latter attended the Global Fund meeting in Lyon in October 2019. The President of Madagascar told him about the situation in the southern part of the country and his fight against malnutrition. Since the Mérieux Foundation had already been established in Madagascar for more than ten years, Alain Mérieux wanted to help support the public health priority identified by the President of Madagascar: malnutrition, which is particularly severe in the southern part of the country. To do so, he approached the Nutriset Group, renowned globally for its expertise in the fight against malnutrition, to manufacture a container plant dedicated to the production of food supplements destined for the south of Madagascar.

“What we are achieving here with this factory has never been done before. It’s unprecedented work that is of vital interest to the entire population,” said Mialy R. Rajoelina, the First Lady of Madagascar and President of the Fitia Association.

“I am delighted that our Foundation, in collaboration with Nutriset, has been able to provide a solution to the problem of child malnutrition in southern Madagascar, a situation that President Andry Rajoelina brought to our attention at the end of 2019. Our Foundation aims to develop a global approach to healthcare and to the fight against infectious diseases, and nutrition is an essential prerequisite in this respect,” underlined Alain Mérieux, President of the Mérieux Foundation.

“We are delighted to be part of this fantastic project, which will have a dual impact. Firstly, providing children with these products will give them a better capacity for learning at school, which is essential to assure their future and that of the country. In addition, setting up a factory breathes new life into the local economy by creating jobs and economic opportunities for agricultural sectors in the region,” added Adeline Lescanne Gautier, CEO of the Nutriset Group.