On 22 November 2021, the Charles Mérieux Center for Infectious Disease in Bamako was presented with new equipment to reinforce its laboratory activities, particularly in the context of dealing with COVID-19.

A ceremony was organised at the Charles Mérieux Center for Infectious Disease to mark the presentation of the equipment and was attended by the people working at the centre and their Director, Professor Bouréma Kouriba, as well as the Mérieux Foundation, represented by its President, Alain Mérieux, and Jean-Pierre Bosser, its Director General. The equipment was presented to the centre as part of the exceptional donation from bioMérieux dividends, with a view to supporting the activities introduced in Mali to combat COVID-19. 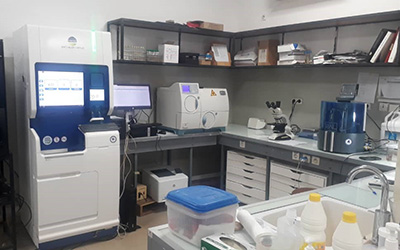 The donation included molecular biology equipment used in the response to COVID-19, such as equipment used for purification and for the detection of nucleic acids. The centre was also presented with bacteriology equipment, which will allow improvements to be made in the identification of bacteria and the development of cultures, susceptibility testing and incubators.

Haematology, haemostasis and biochemistry machines have been purchased to modernise the technical platform and to fulfil requirements for the biological monitoring of patients. As well as these central pieces of equipment, there were also more modest items such as urine cytology devices, centrifuges, microscopes, hoods and other equipment to fulfil the requirements of the Charles Mérieux Center for Infectious Disease and the Rodolphe Mérieux laboratory, which shares the same site.

During the ceremony, Professor Kouriba underlined the important role played by the laboratory in terms of public health in Mali and thanked the Mérieux Foundation for the equipment. Alain Mérieux looked back over the Mérieux Foundation’s involvement in the country, ever since building work began on the Charles Mérieux Center for Infectious Disease in 2004, under the initiative of his son, Christophe Mérieux, to support local infrastructure.