According to the UNAIDS Report, the prevalence of HIV infection in Myanmar stands at 0.8% of the population, with an estimated 220,000 people living with HIV in 2017. Of these, 140,000 people, i.e., 63.6%, are aware of their HIV status. According to the National AIDS Program (NAP), 90% of people identified as living with HIV (127,000 people) are currently receiving antiretroviral treatment, and around half of them are monitored by NGOs. 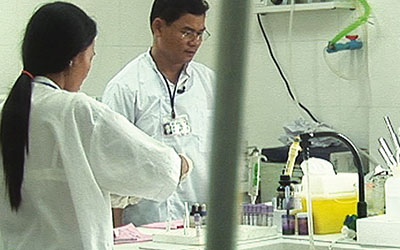 Working in partnership with the NGOs, we seek to facilitate access to HIV viral load testing in Myanmar. This effort is important because it improves the monitoring of people living with HIV and reduces the risk of treatment failure. At the same time, it provides local medical teams with diagnostic tools that previously were unavailable in the country.

One of our priorities in Myanmar is to support the National AIDS Program in order to reach the third “90” target – so that 90% of people receiving antiretroviral therapy achieve viral suppression, which is evidence of sustained treatment efficacy.

After the success of establishing HIV viral load testing in three laboratories, the foundation is expanding this activity to other laboratories in the country.

Three platforms to measure HIV viral load were established between 2012 and 2015 thanks to a partnership with the health authorities, including the Ministry of Health and Sports of Myanmar, MSF (Médecins sans Frontières, or Doctors without Borders) and The International Union Against Tuberculosis and Lung Disease. The platforms are located in:

We measure the viral load of people living with HIV who are monitored by our partners: MSF  and The Union.

A total of 42,200 viral load tests have been performed since 2012 and have benefitted 33,700 people living with HIV who are receiving antiretroviral treatment.

The three platforms perform an average of 13,000 viral load tests per year, representing more than 95% of the tests carried out in Myanmar.

Nearly 20 technicians have been trained in molecular biology techniques (real-time PCR). Each year, they take continuous education classes to update their knowledge and gain hands-on practice. The training sessions are carried out in situ and are also held at the Center of Infectiology Lao Christophe Mérieux in Laos.

In addition, the activities of the three laboratories are monitored on a regular basis.

Our goal is for technicians working in public laboratories to improve their know-how so that the diagnostic technique will be expanded to other laboratories in Myanmar.